Scandalous, the highly anticipated next standalone in the Sinners of Saint Series by LJ Shen is available NOW! 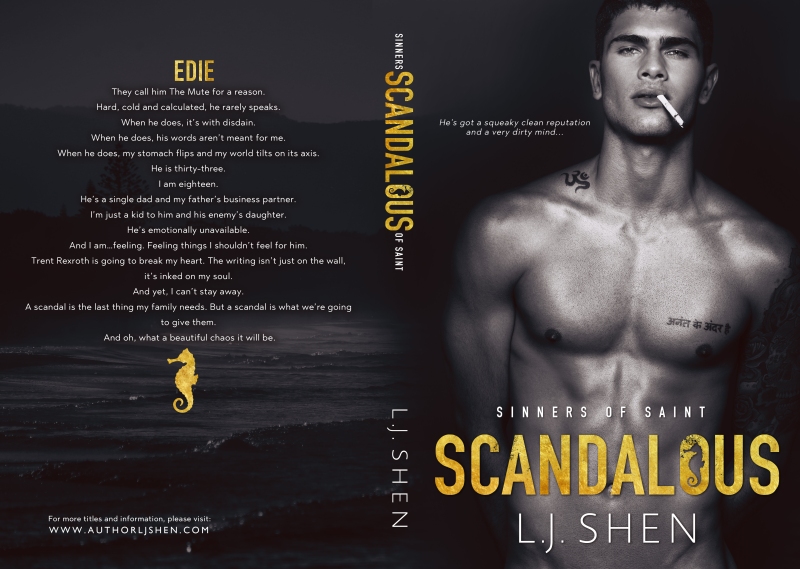 They call him The Mute for a reason.

When he does, it’s with disdain.

When he does, his words aren’t meant for me.

When he does, my stomach flips and my world tilts on its axis.

He’s a single dad and my father’s business partner.

I’m just a kid to him and his enemy’s daughter.

And I am…feeling. Feeling things I shouldn’t feel for him.

Trent Rexroth is going to break my heart. The writing isn’t just on the wall, it’s inked on my soul.

And yet, I can’t stay away.

A scandal is the last thing my family needs. But a scandal is what we’re going to give them.

And oh, what a beautiful chaos it will be.

Finally! Finally, we get Trent’s story and it is ah-mazing!

Of all the HotHoles, Trent has always been the most mysterious. Dark, brooding, angry and not rich. Now, he is rich beyond dreams, part owner of Fiscal Heights Holdings with his friends and their business partner, Jordan Van Der Zee. Trent has a three-year old daughter, Luna, who he loves deeply and protects like a lion king. Underneath all his HotHole-ishness, Trent is a man who went through a lot to get where he is and puts family above all else, even if his personality tends to overshadow the good father he is. Then, he meets Edie Van der Zee and she sparks something in him.

Edie is young, 18 in fact, but she is wise beyond her years. Her father barely tolerates her. Her mother is is a fog of mental disease all the time. She doesn’t like money or rich people, so she resorts to non-traditional methods to get money and survive. The only person who cares about her is her friend, Bane.

When Trent and Edie meets, let’s just say sparks fly, but neither one really knows what to do with it. She is too young for him, his business partner’s daughter and he knows she’s up to something. He is a beast, hates her father and her by association and she is up to something that makes him potentially dangerous. It is a selectively mute three-year old who brings them together and opens their eyes. Luna is not the center of the story. There is much more going on.

Going in, you may not like Trent much, but he will grow on you by leaps and bounds. The sex is what we’ve come to expect from LJ Shen – steamy and a little scandalous. The love story is not easy. It is messy and beautiful and against the odds.

Of special note – I wanted to give kudos to LJ Shen. Trent is mixed and his family was nowhere near wealthy when he was growing up. Shen took this sensitive topic and tackled it head on with grace and care. She also spotlighted that money doesn’t always buy happiness, but family means everything.

Scandalous was near perfection of a read!

Trent’s gaze cut to mine and stopped when his grays met my blues. The fading noise of Vicious barking at people to move along, and my father finally letting go of my arm to move toward Jaime and Dean—probably trying to gain both allies and sympathy—died down.

“I don’t like you,” Rexroth whispered under his breath, his voice harsh.

“I never asked you to.” I shrugged.

“You won’t be working here.” His arm brushed my shoulder, but I didn’t think it was by accident. I let loose a sugary smile, scanning his face and torso for no other reason other than to taunt him. “Good, you’ll be doing me a favor. My father is the one forcing me to work here. He’s pissed I turned down five Ivy League colleges. Remind me, Mr. Rexroth—which top tier university did you attend for your degree?”

The low blow was supposed to retrieve some of my lost dignity, but bile burned my throat, shotgunned from my stomach. Trent Rexroth was known in Todos Santos as an exhilarating success story, rising from the gutters of San Diego. He went to a shitty state college that accepted even the illiterate, working as a janitor on campus after hours. Those were given facts he’d recited himself in an interview for Forbes.

Had I really just tried to make him feel less worthy because he wasn’t born with a silver spoon in his mouth? It made me sicker than wearing my mother’s designer garbs.

Trent smiled, leaning into my body, into my soul. His smirk was more frightening than any scowl, frown, or grimace I’d ever seen. It threatened to tear me apart and sew me back together however he pleased.

“Edie.” His lips were dangerously close to my ear. A delicious shiver moved down my spine. Something warm rolled inside of me, begging to unknot and flower into an orgasm. What was happening, and why the hell was it happening? “If you know what’s best for you, you will turn around and leave right now.”

I elevated my head to meet his gaze and showed him my version of a grin. I was born and raised in a world of intimidating rich men, and I’d be damned if I go down like my mother—addicted to xanax, Gucci, and a man who paraded her on his arm for a short, glorious decade before keeping her solely for public appearances.

“I think I’m going to go find my desk now. I’d wish you a good day, Mr. Rexroth, but I think that ship has sailed. You’re a miserable man. Oh, and one for the road.” I fished for a Nature Valley bar in my mother’s purse and plastered it to his hard, muscled chest. My heart slammed into my neck, fluttering like a caged bird.

I hurried after my father as he glided down the vast, golden-hued hallway, not daring to look back. Knowing I’d started a war and arrived unequipped. But I also knew something else that gave me a surfer’s rush—if I could slam the final nail in my employment coffin and make Rexroth vote against me, I’d be off the hook.

I had just the plan for it. All I had to do was act like a brat. Game on. 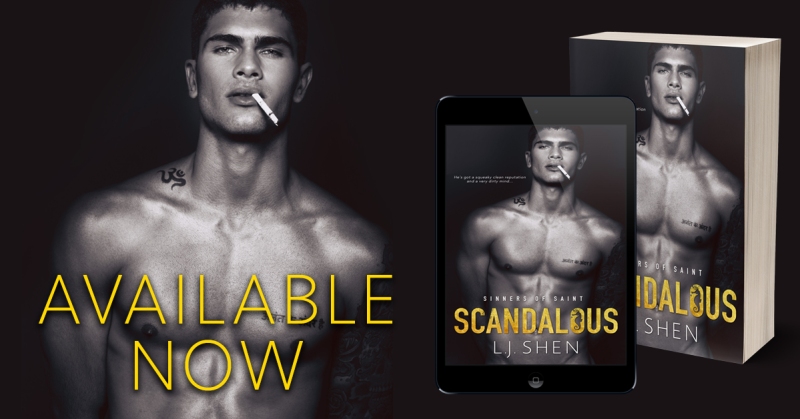 Start the Series of Standalones Today!

L.J. Shen is an International #1 best-selling author of Contemporary Romance and New Adult novels. She lives in Northern California with her husband, young son and chubby cat.

Before she’d settled down, L.J. (who thinks referring to herself in the third person is really silly, by the way) traveled the world, and collected friends from all across the globe. Friends who’d be happy to report that she is a rubbish companion, always forgets peoples’ birthdays and never sends Christmas cards.

She enjoys the simple things in life, like spending time with her family and friends, reading, HBO, Netflix and internet-stalking Stephen James. She reads between three to five books a week and firmly believes Crocs shoes and mullets should be outlawed.