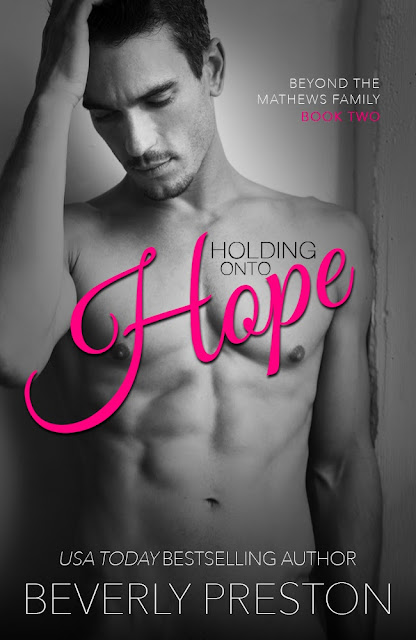 Master Sommelier, Hope Tidwell travels the globe seeking out the finest wines. She refuses to let relationships get in the way of her career and abides by a strict set of rules:

No ties.
No expectations.
No risks.

Lucky for her, those rules work just fine for Antonio.

When Hope’s sister asks her to do the one thing she’s sworn never to do, she can’t say no.

She never intended to travel down this road.

When unanticipated and devastating events throw the trajectory of her life so far off course, she can’t even recognize her world anymore. Suddenly, the rules no longer apply.

Will Hope be able to do the one thing that terrifies her the most?

*Please note Holding onto Hope was previously released as The Italian

Excerpt
“Stay,” he suggested in a tone so sinfully rich it made her head swim.“Can’t.” Hope bobbled on one foot, slipping the other into her leather crisscross Louboutin black pump. A smile tipped the curve of her mouth, catching Antonio’s reflection in the full-length mirror. He lay naked, sprawled out across the bed looking rumpled and warm, watching with wide-eyed interest as she bent to fasten the tiny buckle at her ankle.

“Rimani Qui?” Antonio repeated the request in Italian, the pull of his accent intoxicating and powerful. His light-grey eyes, full of playful offerings, gleamed in the early morning sunshine pushing through the window.

An involuntary laugh escaped her parted lips, attempting to conceal the hint of regret riddling her voice. “I’ve already extended my trip. My boss might think I’m taking a vacation on her dime if I stay any longer.”

It took every ounce of composure to keep her wits about her. Out of all the lovers Hope encountered during her travels, Antonio was always the hardest to leave.

Antonio Giovanni was the epitome of all men that women dreamed of. Tall, dark, and handsome with an accent sexy enough to leave a trail of women swooning in his wake. The man wore charisma like a fine silk suit…flawless and molded to perfection in all the right places, leaving just enough concealed to make you wonder what lay hidden beneath the faultless exterior.

“Si, I think you need some rest and relaxing. Come back to bed, bella.”

Drawing a long breath through her nose, she envisioned a week-long Tuscan rendezvous curled up beside him, under him, on top of him. Hope’s lashes dusted shut at the delicious image. Tempting.

“I really have to go or I’ll be late for my meeting with Tracy. I don’t want to embarrass myself in front of your sister-in-law.”

Taking hold of the extended handle of her suitcase, she started for the door. Antonio rolled to his back. Reaching an arm above his head, he caught her around the hip, halting her rush. A low laugh simmered in her chest at his tenacity.

“You have plenty of time. Tracy said she’d be in her office between nine and ten.” Antonio slipped a strong hand beneath the hem of her indigo wrap dress. His thumb played mindlessly along her bare thigh, coaxing a shiver up her spine. “And it’s only eight thirty. Let me take care of you before you go.”

“I have to be there at nine, otherwise I’ll be cutting it close to make my departure on time, and I can’t miss my flight again.” Her voice diminished, feeling his long, strong fingers curl around the back of her leg, pulling her close, until her knees rested against the silk bedding. The subtle aches in her inner thighs, sweet and electrifying, brought reminders of the night before.

Digging a heel into the mattress, Antonio inched his body further across the king-sized bed until his head dropped over the edge. The stark white sheet purposely arranged low on his hips, exposing the dark, trimmed hair at his groin. Heaven lay just beneath the silky sheets.

A small, wistful sigh of appreciation floated from her lips, taking in his lean body and sculpted abs. He looked nothing short of breathtakingly exquisite.

“Si’. I’d hate to make you miss your flight again.”

He didn’t sound one bit remorseful.

“Liar,” she teased, barely able to hear her own voice over the pulse hammering in her ears. “I think you’re trying to torture me.”

“Si, I could torture you all day. Stay,” he murmured, taking a gentle bite of her outer thigh.

She smiled down at him, running her fingers through his thick, dark hair. If she didn’t leave in the next sixty seconds, she’d be straddling his face in sixty-one. A tousled mass of golden brown curls fell over her shoulder as she hinged at the waist, placing a long kiss goodbye to the edge of his scruffy jaw.

“So beautiful,” he murmured. Pushing the loose tresses from her face, he twisted, brushing his lips to hers. Taking her mouth, he deepened the kiss, their tongues dancing in a smooth, masterful art of seduction. The provocative pressure, demanding yet playful, drew a low groan from her throat.

“Ciao,” she whispered contritely in his ear.

“Email me the next time you’ll be in Italy. Ciao, bella.”

Hope smiled, brushing the tip of her nose to his. Her upside-down stare connected with his, soaking up the last few glimpses of silvery grey before walking out the door.
Also Available

Beverly Preston is a USA Today bestselling author of contemporary romance. She writes emotionally rich and sinfully sexy stories about the ultimate alpha good guy; the kind of man you want to drag you to bed and put a ring on your finger. She also has a passion for strong, humorous, female characters and stories ingrained in a solid sense of family and loyalty.
She lives in Las Vegas with her husband, four kids, and two golden retrievers. If she’s not spinning richly emotional stories, you’ll find her on her spin bike.
Author Links
FACEBOOK
TWITTER
INSTAGRAM
WEBSITE
PINTEREST